August 20, 2017
When I first moved to Colorado, the house I was staying in at the time had a book titled, "The Colorado 14ers". I had to Google what a "14er" was and quickly ascertained that hiking one of those bad boys was completely and unequivocally out of the question. Living in the snow at 9,000 feet was going to have to be enough for me. For those who have no idea...a 14er is a mountain peak with an elevation of at least 14,000 feet. There are 53 of them in the state of Colorado.

7.5 months after saying "never will I ever", I climbed one of those bad boys on a day that will no doubt be remembered as another massive accomplishment achieved in the first year of living in Colorado. 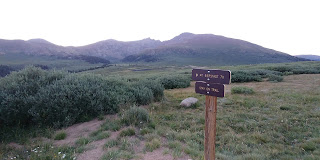 Mt. Bierstadt is rated one of the "easy" ones. It stands at 14,062-ish feet (depending on what damn boulder you stand on, I suppose). "Easy" is a cute term. You begin at over 11,000 feet and climb up a literal mountain to get to the peak....the peak, by the way, is reached by climbing over boulders into the sky. See:


My closest friend here also moved from Georgia a week after I did we just didn't meet until after we both had moved thanks to a stellar introduction from a friend in Georgia. She and her husband became quick friends and I spend many weekends with them. She's my hiking buddy and when she suggested we do this, I was hesitant, but also love a good challenge so I agreed. We arrived Friday evening to find a camping spot along Guenella Pass. I'll pause here to say that THAT in itself would have made for a perfect weekend because it was stunning.

Saturday morning began with an alarm and instant coffee at 4:30am. We were on the trail by 6:30 as the sun was rising and discovered very quickly that we were late to the party....or on time if you're into jockeying back and forth and between hundreds of like-minded people. The sheer amount of people was frustrating. In fact, it was probably the worst part. Especially the talkers that we'd keep getting caught up with. Look, honey, I appreciate your boyfriend once took you on a hike and that you had a great time and that this is much harder and that you are so happy to be out here and, oh look at that!....but some people (me) need a little quiet while we're both appreciating and suffering through nature. SHUT. UP.

I digress. The first half of the trail was by no means easy...I'd say about a mile up Erica and I were both like, ohhhh, we can feel that elevation, but overall we both felt good. Then the halfway mark came and shit got real. We climbed up and up and as the air started getting thinner, so did my patience. The wheels came off the bus for a brief moment with about a mile to go. I had looked up and it felt like the peak kept getting farther away. I'm a complainer by nature, but I'm also stubborn, so there was exactly NO way we weren't getting to the top of that thing.

After a about another hour plus of hiking and a few scary moments of climbing boulders, we made it and we had made really good time... We, along with half the population of Colorado, spent some time at the top taking our obligatory photos, enjoying a cold beer and taking in a view that makes a person feel very insignificant.

I had been told to be descending no later than 11:30am because the weather can change in a heartbeat and lightening strikes are common. Because of this, we had given ourselves plenty of time to get up there, enjoy the view and get the hell outta there before becoming new headlines. We knew it was time to go when the wind came in and the gusts were enough to make you feel like you were gonna fall off the side of the mountain. We, along with half the population of Colorado, all decided to start descending at the same time apparently. Turns out, climbing down boulders is a little scarier than climbing up them especially when you're in a rush.

The hike down was rather uneventful, until we hit a pit stop with about 1.5 miles to go. I put my pack and hiking poles down and made the, "It REALLY smells like piss", comment about 3 minutes before realizing the source of said piss stench was right where I laid said pack and poles. The bottom of my pack, my hiking poles and bite valve to my hydration pack were covered in muddy piss. Or pissy mud. Either way, that's when the tears came. Tired, hangry and with sore feet, that was the last f'ing straw. "I cannnot wait to get off the f'ing mountain!", were words that probably came out of my mouth... We made good time that last 1.5 miles, though!

We spent Saturday afternoon relaxing at our campsite. I took a few minutes to go sit next to the stream that was nearby (and that we could hear from our campsite!) because as much as I love mountains, I love water. I sat there listening to this beautiful stream doing it's thing in between a mountain range and I guess that's the 2nd time I cried that day. I am thankful for this place, the opportunity to live in it and the ability to enjoy the hell out of it. My silent hope while sitting there was that I never, ever take this place for granted because I am literally living the dream. 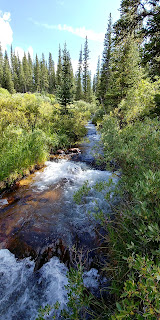 I have no idea if another 14er is in my future, however, I have a feeling there probably is. If there isn't, though, this weekend's adventure was a beautiful, soul-filling challenge and I'm proud of that.