November 19, 2018
On October 28th, I closed the book on 2018's athletic endeavors with a thing I swore as early as this Spring that I would never do: a marathon.

There is no way I'd have agreed to it or trained for it if it weren't for Hank Poore, who is a dear friend, Kpeasey athlete and marathon veteran. We decided to take on Marine Corps Marathon in Washington D.C. and I am so glad we did.

Even though I'm in the best shape of my life thanks to that little bike ride I did in August, I wasn't sure how I'd do. I knew that so long as I kept up with my training post ride that I'd get it done. I just wasn't confident in how quickly or painless I'd be able to do so. My greatest fear going in to race day was letting Hank down. This was his 3rd Marine Corps Marathon and the previous girls he'd run with were much faster. I'm what I like to refer to as a "forced athlete" and speed does not come naturally to me. The only PR Hank was gonna get with me was his slowest one. I was petrified more than I'd ever been going into to race weekend.

However, as soon as I was with Hank and his mom, Kathy, I was calm. There was something that happened that eased my mind about this race I was so nervous about. The pre-race jitters, the doubts...it all went away as soon as I was with Team Poore. There is something about that awesome family that feels comfortable. We spent Friday evening catching up, going over our race plan (HAVE FUN!) and being together. I was with my people.

Friday and Saturday were (and always are) a bit of a blur as my role wasn't just athlete, but logistical coordinator. We got through our to do list, thanked the rain Gods that race morning was going to stay dry and got our group of 17 teams ready to race!

Race morning came after a night of no sleep...thanks time difference! It was chilly, but the rain that was foretasted all week held off. We arrived to our team tent to unlock chairs and athletes started to trickle in. Thanks to an awesome group of guys, I was able to not play race morning "mom", but spend time playing athlete! The waiting game before an event is the worst part of everything. Oddly, though, the race morning nervousness wasn't really there. I knew we were ready and all I kept thinking was, "Holy shit. It's here. We're going to finish a marathon today."

The race start for MCM is pretty incredible. There are parachuters who float down holding the American Flag while the National Anthem is sung. Some sort of cannon that goes off and scares the living shit out of everyone EVERY year. There are jet fly overs. These people do it up. They also allow duo-assist teams to start 5 minutes before everyone else. It's pretty special to be at the very beginning of the start line. It's also fun to watch as the insanely fast people pass you like gazelles while you feel like a big fat elephant... 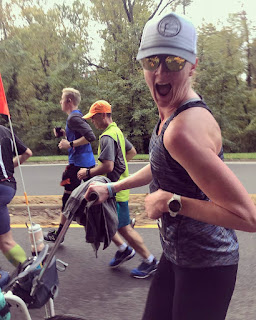 Hank's chair is pretty unique as it's a reverse recumbent trike in which he has control. He steers, he brakes and he pedals which, so long as we don't have a dropped chain/slack chain, is a huge help! I'd communicate to him to move right or left (or slow down going down hills) and we got into a groove almost instantly. The first 8 miles went by pretty quickly. In fact, I had my 2nd best ever half marathon time!!

We had a great time together. He'd laugh at my dumb comments which always helps. We laughed as I convinced myself I had accidentally choked him when throwing peanut m&m's into his mouth... The crowds of supporters (including our Kpeasey family) were invaluable. There was never a moment where we were alone and it made a world of difference. 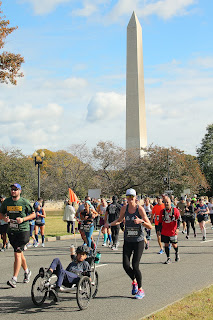 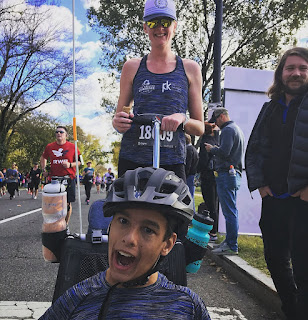 At about mile 18, the wheels began to fall off the bus (but not the chair, so. Bright side!) and I was kind of done. This is where my mental game takes a toll. Physically, I was OK. I know Hank started having knee pain and I was running on concrete so there's no way things weren't going to hurt. My tummy hates it when I run and I hadn't properly trained with nutrition, so I was on the struggle bus big time. I couldn't fathom putting another gel into my body and was dying for some salt which was not readily available.

There's a section of this marathon called "Beat the Bridge". I'd heard of it, but didn't quite understand what that meant. For starters, it's a climb. Over a bridge. AT MILE 20. There is no access for the incredible crowds of cheerers to said bridge, so it's you, a ton of runners and, if you're me: tears. It was at this point that I realized I wasn't going to beat Oprah's 4:30 marathon time and I lost it.

Was it cool to quit now? Because I was done.

It was at this point that a couple came up next to us and walked with us for awhile patting me on the back and chatting with Hank. While I don't remember the entire conversation, I remember the woman saying, "You're there. You've gotten THIS far. You're going to finish a marathon today!". It was the kick in the ass I needed to get out of my negative head space and get this thing done. Also, Oprah can suck it because she wasn't pushing someone, was she?

Mile 22 to 23 were probably a couple of my favorites. It's a section of the course I now lovingly refer to as "The Buffet" where the course was lined with amazing people handing out everything from goldfish to beer to candy. I've never trusted more strangers with food in my life. The thought of all the dirty hands I touched and food I put in my mouth weren't half as bad as the nausea I was experiencing. The goldfish and 2 sips of beer (DON'T JUDGE ME) eased my tummy and ended up being the last bit of sustenance that I needed to get us to the finish.

We hit mile 26 and the realization of what we had done came crashing down. HARD. The tears came again...those happy ones where you soak up every painful step because something amazing had just happened.

Crossing the finish line with Hank was more than I'd hoped it to be. To hear the joy in his yell as we crossed over was something I'm going to cherish forever. We did it. Hank helped me become a marathoner!! 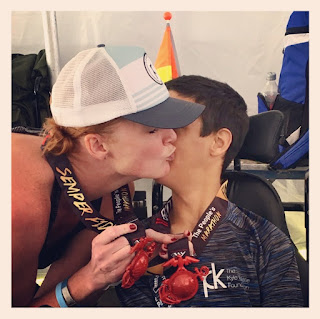 3 years ago, I came to Marine Corps Marathon with The Kyle Pease Foundation and my life changed. To add myself to the athlete roster and accomplish this goal that I couldn't have even thought possible just 3 years later makes this very full circle for me. These people are my family and I love them and I am forever grateful for the love, the support and the inspiration.

Thanks to Hank Poore, I'm a MARATHONER, y'all!!! 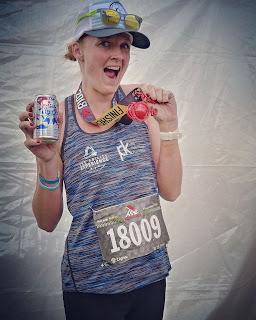