August 13, 2013
So, J scored some pretty great tickets accompanied with a great parking place AND discounts on food and beer for the Braves game on Saturday night.  Can you say "date night"?!

Honestly, we aren't huge sports fans.  I probably would be a bigger one if my husband was, but he just isn't.  That means that even though we live in a city with a couple of pro sports teams, we've never in over 4 years been to a sporting event.  I was pretty excited!  I even got out my old Braves baseball t-shirt from 6 or so years ago.  I was happy to discover that Brian Mccann still plays for the Braves so I was still relevant!  :-) 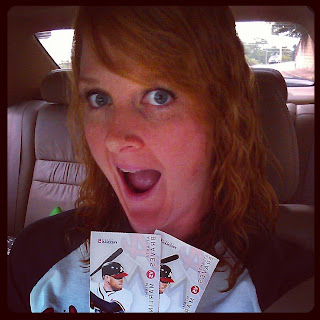 The Braves also happened to be on a FOURTEEN game winning streak and were going for number 15, so we were pretty pumped to go.  The drive to the stadium was interesting in that the city of Atlanta likes to shut down many roads leading to Turner Field.  If you aren't an avid attender of games, you may not realize this and circle under I-85 a few times before finding your way.  For once, we really weren't in a hurry.  Even though we missed the first pitch, we still got there in plenty of time!

When we did get to the stadium, we decided to find our seats first.  RIGHT behind home plate.  Not too shabby! 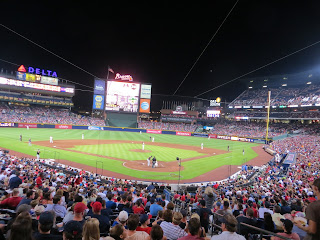 Our next mission was to find the necessities for any baseball game:  hot dogs and beer.  That was easy enough given the fact that there's a food & beer stand every 10 feet in that place!

We headed back to our seats to watch the first inning and not 5 minutes into our hot dogs, beer and baseball experience...it started to rain.  Pour, actually.  That began a 30-ish minute rain delay where, we hydrated and hung out under cover.  Luckily, it didn't last too long and we were back out enjoying our seats and the game pretty quickly. 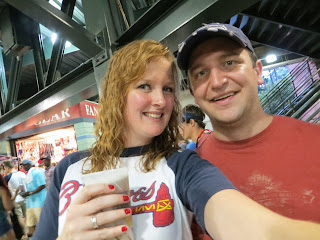 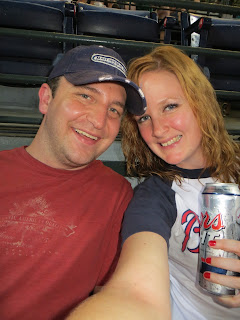 There was a man and his 11 or so year old son who were sitting next to me at the game.  The kid was really enthusiastic, knew every player who walked on the field and he and his dad had a really great rapport with each other.  The dad ran to get some necessities: hot dogs and beer for himself :-).  While he was gone, his son and I started talking.  I asked him if he came to many games and he told me that this was his first, but then very enthusiastically told me he was going to the Sunday afternoon game, too!  He told me about his favorite players and which positions he played on his own baseball team.  He also was very excited to tell me that he got a ball signed by all the players that day, too!  It was so awesome to see this kid who was so enthusiastic, excited and truly happy to be at a ball game.  It was also awesome that he was there with his dad, who was sharing that experience with him and was also pretty enthusiastic himself.  I didn't get their names and I didn't get a chance to say goodbye, but they made my heart happy.

So we had a great time despite the rain....and the fact that the Braves lost that night, thus not getting their 15th win.  I sort of feel like bad luck.  :-)  In any case, I'm kinda hoping we go to more Braves games.  It was fun! 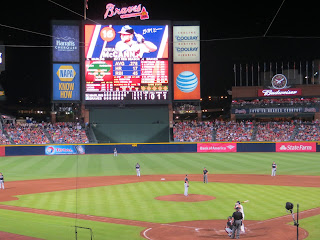 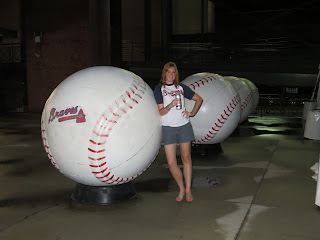 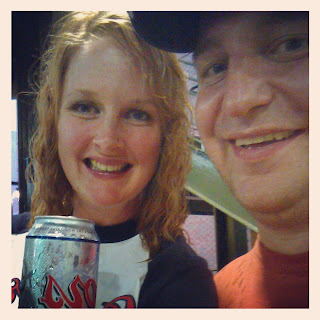 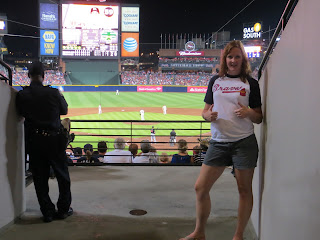 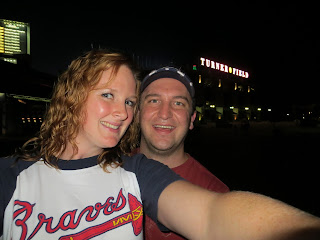 “Never allow the fear of striking out keep you from playing the game!”
-- Babe Ruth


“We picked the Red Sox because they lose. If you root for something that loses for 86 years, you're a pretty good fan. You don't have to win everything to be a fan of something.”
-- Jimmy Fallon