A friend sent this video to me and when I watched it, I was struck more by the feelings it brought up around the content than the story itself.

Christen Reighter's story is an interesting and frustrating insight into what it means to NOT want a child. I invite you to watch this. Her experience is not unique and needs to be talked about. Even if you have kids. Or want them.

What struck me most was what she says during her TedTalk: "I have believed having children was an extension of womanhood, not the definition."

Truth is, I've been struggling with this lately. Not the fact that I'm longing for children. I'd be fibbing if I said there is a very tiny part of me that wonders what this will feel like when I get to the end of life. HOWEVER. That feeling isn't strong enough for me to want to find out. I don't feel like having children should be thought of as a "keeping the fingers crossed" kind of situation. If you aren't sure you'll be able to truly care for them or are looking for some personal fulfillment, then please don't.

When I say "care", I mean loving them, nurturing them, and molding them into good humans. Because that’s your job as a parent.

And when I say “fulfillment”, I mean that Instagram loves other fun life things like puppies. Don’t just do it ‘cause that’s what the cool people are doing.

It's the current state of the world, the experiences I’ve had in my life, and the people I’ve seen fail at this (including my own parents) that make me not want to bring another life into the world.

I’m Not Your Patsy

The world looks down on women who don’t have children and assume we’re incapable or selfish. And that somehow makes us sad in their eyes. We’re viewed as one of the Patsy’s of the world: power/career hungry party girls with no ability to truly love anyone but ourselves. 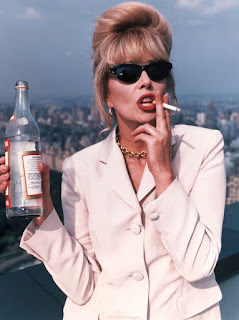 And this makes us somehow "less than" whether a person has the balls to say it or not. Props to the people who believe this and say it because at least it can lead to a conversation...

It happens in the comments from mothers who say, "Being a mother is the most important job on Earth." Maybe to YOU, it is. And that's good since you're responsible for making sure this person you brought into the world is a positive contributor to it.

It happens when church leaders make comments and impress upon their congregants that not having children is selfish.

It happens when parents say, "when you're a mommy one day" to their little girls.

It happens when a friend gets pregnant, and they change into this person who says things like, “You’ve never been pregnant. You’ll never understand.” Perhaps don’t say that for a multitude of reasons, mostly that you may not know if someone has been pregnant just because there isn’t a child present.

And we non-moms perpetuate this societal bullshit, too. Playing it off by making jokes like, "Oh, my dog is my kid. I couldn't handle more of him!" or "My money is all tied up in hobbies and vacations." Or “I’m gonna be that cool aunt that’s drunk at parties.” The list goes on…

I don't necessarily want to be viewed as Patsy on Ab Fab although ICONIC. (Google it, kids) No. I'd like to be looked at as someone who made a conscious, arguably unselfish choice to not add to the mess the world is. Because THAT IS MY OPINION AND CHOICE.

This is going to sound strange, but you’ve made it this far so stick with me.

I'm 37-years-old and feel like I've (unsuccessfully) raised a 33-year-old. Let me explain.

My childhood was, at worst, traumatic and, at best...inconsistent. I hope to tell more of this story one day because:

a.    You cannot write this shit and

b.    Because I think it’ll help get some of it on paper

To make a life-long story, very short: I was 4.5 years older than my younger brother and when things started to become tumultuous in our home, I became his protector. I did my best to bear the burden of a sometimes terrifying environment because I was scared for him. I somehow innately took on this role when I was SIX YEARS OLD.

This went on until I was nineteen and moved away from home. And I can tell you that I sucked at it since, you know, I was also a kid.

I’ve realized only very recently that this is a large reason why the idea of having my own child is terrifying and preemptively exhausting.

I tell you this not as a sob story. But because it’s my story.

No sads here. That’s what therapy is for friends!

I tell you this story because perhaps the next time you’d like to make a comment or judge a woman for not having a child, remember that you have ZERO idea of what her experience is.

And to shut the fuck up.

I ask that I (and the other non-moms of the world) be looked at less so as a Patsy (seriously, love her, though!) but as someone who understands her own background, genetics, the examples she had as parents and made the best possible choice given all of those factors.

I believe that I have and will continue to contribute the good in me to the kids in life I’m fortunate enough to love.

Why is that less of a contribution because I haven't birthed them?

I’d like for you loud and closeted naysayers of the non-moms to consider that maybe it’s not selfish, but self-less to understand that the world may not need another little Hellion (ß see what I did there) running around.

The world doesn’t need more me…but it sure does need more love and empathy.